Groups are a great aid for organizing your map and for making many mapping tasks easier. Map elements that have been put into a group can be treated as a whole, and thus they can be edited, transformed and modified as if they were a single object. Groups can also hide their elements from the views and lock them in order to prevent them from being edited.

In the latest versions of CaWE, groups are also persistent: Groups are saved in and loaded from Cafu map files so that they are available from one session to the next. Moreover, any changes to groups and their properties are recorded in the edit history and can be undone via the Edit → Undo menu.

In summary, groups act like layers in image processing programs. They are helpful and easy to use. This section explains the details.

In order to create a group, use the Selection tool in order to select the map elements that you want to become the members of the new group. Then use one of the following methods in order to put the selected elements into a new group:

Each of these menu items or buttons creates a new group and puts the selected map elements into it. The Hide Other button is an exception, as it will group everything else. The two Hide buttons additionally mark the newly created group as hidden, so that the selected map objects will disappear from the views. 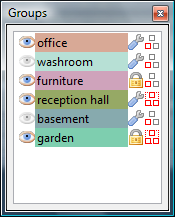 The Groups panel shows a list of all groups in the map. If the Groups panel is currently not visible, use the View → Panels → Groups menu to show it, or see Panels for more information.

Each group is shown in a line with information about the groups settings: its visible/hidden status, its name, its color, its edit/locked status, and whether the group members are selected individually or as a whole. Each of the icons can be clicked in order to toggle its status.

The members of a group can be hidden from the views:

the group is visible.

the group is hidden.
This is very useful for getting things “out of the way” when you're editing a portion of the map that is usually occluded by other map objects. It's also a nice trick to enhance the performance on older computer systems: When the rendering is too slow, just hide the parts of the map that you're currently not editing, and the rendering of the remaining objects of interest will be much smoother.

The initial name of a group is automatically assigned when the group is first created, and can be changed at any time: Press F2, single-click a selected group, or use the context menu (described below) in order to assign a new name, e.g. one that describes the content or purpose of the group.

When you double-click the group name, the members of the group are selected in the map.

The groups color is indicated by the background color of the group name. When activated in the CaWE Options dialog, the member elements of a group are rendered in the groups color, so that they are easy to see in the map views.

The members of a group can be prevented from being clicked in the map views:

the members of the group can be selected.

the group is locked.
This icon toggles whether groups can be selected with the Selection tool. When the icon shows the lock, the members of the groups cannot be selected in the 2D or 3D views, and thus they cannot become the subject of inadvertent edits, transformations, or other modifications.

The grouping nature of a group can be turned on and off:

the members of the group are selected individually. 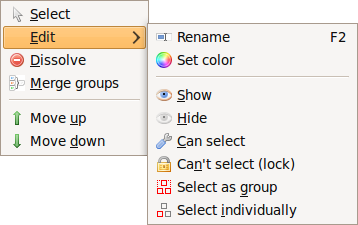 It is important to note that multiple groups can be edited via the context menu: Just select one or more groups, and the context menu operation will affect them all at once.

Any changes to groups and their properties are recorded in the edit history and can be undone via the Edit → Undo menu.