Importing Maps from other Games/Editors

If you have already made maps with other editors for games like Half-Life 1, Half-Life 2, Quake 3 or Doom 3, you possibly wish to use them with CaWE and Cafu as well. For this purpose, several importers are provided that can load such maps directly into CaWE. 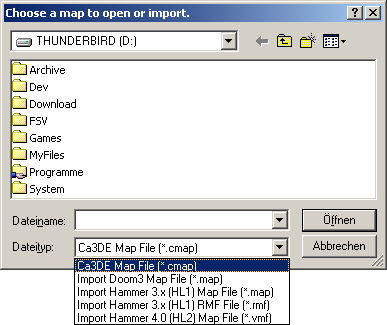 In order to import a foreign map, just activate the File → Open… menu item or press CTRL+O in order to open the file open dialog.

The drop-down box near the bottom presents a list of all file types that CaWE can directly load or import. Just choose the desired file type and proceed to open a map file of that type as usual.

After the import, there are normally two additional problems that you may encounter: material and entity mismatches.

Material mismatches are caused by the fact that the material systems of all game engines are different from each other. While we can create new materials in Cafu under the same names as those that occur in the imported map, converting the used textures and other material details is generally not feasible. Some importers therefore substitute all material occurrences in the imported map file with native Cafu materials that are valid, but have different names.

In all cases, you'll have to re-texture the imported map manually with native CaWE materials. This is recommended and frequently desired for best results anyway. Employing the powerful Edit Surfaces tool and the Replace Materials dialog gets the job quickly and conveniently done. Making use of the “Only show USED materials” checkbox in the Material Browser is also helpful.

The following list summarizes what you have to know and consider about entity mismatches: