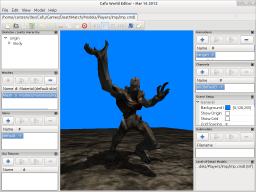 Thus, its purpose is to:

Summarized, the Cafu Model Editor makes your models ready for use in the Map Editor and the Cafu Engine.

What the Model Editor is not

The Cafu Model Editor is not, despite its name, a general-purpose editor that lets you shape meshes or create a model from scratch: There are many commercial and free programs for this purpose already that we don't intend to rival. In fact, model artists use one or more of these programs early in the work pipeline to create and shape the model, then use the Cafu Model Editor as described above.

Also, with the Model Editor we don't attempt to provide a graphical user interface that saves you from editing script code: Many models files are scripts, and accessing some features is only possible by editing the script code in these files. Our goal is to employ the Model Editor for everything that is hard or impossible to accomplish with model scripts or otherwise. Tasks that are best solved in script code are left in script code, for which we provide thorough documentation in order to make them easy to understand and master.

With these key ideas, we can achieve the most effective solutions for all tasks about models. 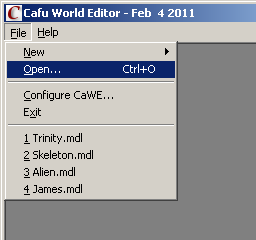 Like the other asset editors, the Model Editor is a part of CaWE. You start it via menu items

With both menu items, you're next presented the File Open dialog to open a previously created model.

Check out the Main Window and the How-Tos for the next steps.

At this time, the following file formats are supported: