When you have finished editing a map in CaWE, you’ll want to run it with Cafu. The engine however requires that the map is in a precomputed form, and this section describes how you turn your map into a fully precomputed world file. The process of turning your cmap map file into a for the engine usable cw world file is called compiling.

As to not force you to run the compile procedure for all your cmap files by hand, the CaWE mapping editor provides a “Compile” menu with which you can easily and very conveniently accomplish this task. In this section, you'll learn how to use it. 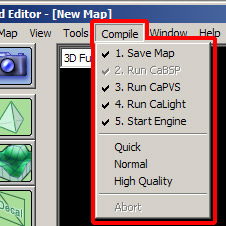 You will find the “Compile” menu in the top menu bar of CaWE. It's items can roughly be separated into three distinct groups: The upper group tells CaWE what to do, the middle group says how to do it and the lower group is for stopping the compile process early. The function of all items is explained in greater detail below:

The upper group of menu items tells CaWE which steps of the compile process should be run. You can turn the individual parts on or off by checking or unchecking the mark in the appropriate line.

After you have selected which steps should be included in the compile process, you can start it with varying quality settings by clicking on one of the three items of the middle group (“Quick”, “Normal”, or “High Quality”). These settings mostly affect the quality of the lighting generated by CaLight, and therefore have a direct impact on its run-time.

After you started the compile process, a console window opens, showing compile details and progress information. Note that you can simply close the console window at any time and continue to work on your map while the compilation process keeps running in the background. Just use the “View → Screen Elements → Console” menu to toggle the console window on and off. The three menu items to start a compile will be grayed-out while another compilation is running, so that starting two compile processes simultaneously is not possible.

However, you can stop the entire currently running compilation process prematurely by clicking on the “Compile → Abort” menu item.

If you activated the “Start Engine” item, Cafu will be started when the compile process is complete and you'll just have to click on “OK” in the Cafu dialog to start and play your map!

Using the “Compile” menu requires that you have setup the “Configuration” dialog of CaWE completely and properly. If a compiler cannot be run correctly, please check if you got all the executable file names right in this dialog. Please refer to Installation, Initial Configuration and De-Installation for more details.

If your map turns out to be pitch-black when run in the engine after the last compilation step, a likely cause is that you kept the CaLight compiler enabled, but did not place any radiosity light source (i.e. no light or sky material). For checking this quickly, just disable CaLight in the “Compile” menu, then start the compilation again and review the result in the Cafu engine. Thereafter, you may want to place some light sources into your map by applying materials that cast radiosity light, and re-enable CaLight again in order to compute a proper, realistic radiosity solution.

For quick tests during map development, you can save a lot of compile time by turning off the CaPVS and CaLight compile steps. You may get very low frame-rates and only full-bright lighting, but that's usually fine for checking the map geometry. When you're done, or about to release your map for others, you definitively should compile it once with CaPVS and CaLight enabled, in order to obtain the maximum speed and quality.