The simplest form of a material definition is to only specify the texture map images that compose the material. The previous example, repeated here, was an example for such a simple definition:

The initial keyword (diffusemap etc.) defines how the texture image is used in dynamic lighting computations during rendering. This is very similar to Doom3 materials, and both Cafu and Doom3 implement in this regard a form of the Phong lighting model.

Texture map image specifications with the above keywords can not only be simple file names, but also be more powerful Map Compositions. A map composition is a description of how a single texture map image is composited from several source images on disk. Here is an example for a simple material whose normal-map is defined by a complex map composition:

Technically, a map composition is completed before the Cafu engine or the graphics board see them. In other words, the engine or the 3D hardware never see the individual images, only the composite result. Everything that is done by these composition steps could also be pre-worked by the artist in an image processing software. There would be no difference for the engine, the hardware, or in the resource (memory) consumption. Note that this feature has nothing to do with dynamic lighting or how a texture map image is combined with images of other texture map specification keywords!

The meaning of the minFilter, magFilter, wrapS and wrapT options is analogous to their respective meanings in the OpenGL and DirectX APIs. The OpenGL Programming Guide (the “Red Book”) about OpenGL version 1.2 and higher has a good explanation about these options. Although the text is specific to OpenGL, the same concepts apply to the above mentioned options. The “Red Book” for version 1.1 does not address the clampToEdge option, but its text is available online at http://www.rush3d.com/reference/opengl-redbook-1.1/chapter09.html.

The options noScaleDown and minFilter bilinear are often combined, because both scaling down textures for better graphics performance as well as using trilinear filtering for rendering have a tendency to mix the colors of neighboring pixels. In some cases such as font textures, even the bilinear filtering is too much mix-up, requiring us to combine noScaleDown with minFilter nearest. 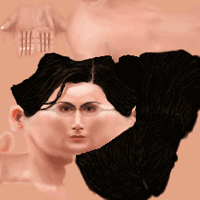 This is a typical skin texture that a modeller has produced for application to one of his model meshes. 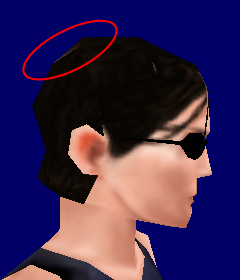 The image to the left shows the result of the this material definition being applied to a model mesh. Notice the small glitch in the image, which is a result of mipmaps being applied to the above shown texture: Mip-mapping mixes black pixels of the hair with adjacent, bright pixels of the skin, yielding the intermediate colors that are marked in the result image to the left. Such glitches are even more disturbing and better visible with animated models, e.g. when the head of the model slightly turns.

Note that these kinds of artifacts are no bugs, they are a normal result from mipmap filtering. 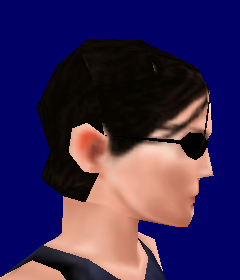 With the noScaleDown and minFilter bilinear keywords applied in the material script, the glitch disappears as shown here: