You can inspect the skeleton in 3D view in the Scene Setup: 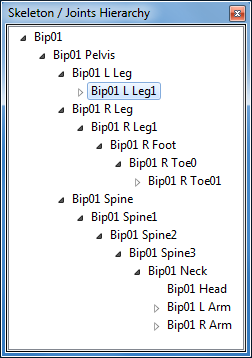 The Skeleton / Joints Hierarchy pane shows all the joints in the skeleton, hierarchically arranged. Items in the hierarchy tree can be expanded or collapsed with the nearby symbols.

A single click on a joint selects it, a double click opens the Joint Inspector pane as well.

Pressing the F2 key or a single-click on an already selected joint allows you to rename the joint in place.

An RMB click in the Skeleton / Joints Hierarchy pane opens the context menu: 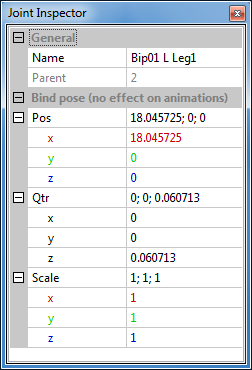 The Joint Inspector pane shows the details of the currently selected joint.

The General section shows the name of the joint (it's another option to rename it), and the index number of the parent joint.

The parent index number is a technical detail that cannot be changed. You need it only if you edit the model file in a text editor or work with the Cafu model C++ data structures.

This section shows the position, orientation and scale of the joint (i.e., the coordinate system).

That is, the Joint Inspector is great for manipulating the individual bones of static models.

It is however useless for animated models, because technically, each animation sequence brings its own set of (animated) joints that cannot be manipulated individually. If you want to do that, refer to Transforms: translate, rotate and scale instead.

The currently selected joint of the bind pose is described by these parameters: